Fight against the deadly disease!
In the spring of 1996, a 3-year-old little boy came down with one of the most ruthless illnesses, cancer. Mr. István Balogh and his wife started to fight together a long struggle against the Non-Hodgkin Lymphoma and for the life of their son, Roland. During chemotherapy, besides the terrible side effects caused by the medications, they had to face not only the reality of cancer, but also the prevailing feudal and hierarchic medical mentality in Hungary. Mr. István Balogh fought heroically for the life of his beloved son. In order to ensure for him the best possible treatment and a final full recovery, he contacted the best onco-hematologists of the world, and with their assistance little Roland was finally declared fully recovered in December 1996.

During their struggle, the Baloghs also experienced the dedication and generosity of medical doctors and nurses, but they also sadly witnessed the tragic demise of so many other children. During the nine months that they had to spend in and out of hospitals, and during the continuous medical check-ups, the death of children became increasingly unacceptable for them. What became even more intolerable for Mr. and Mrs. Balogh was the fact these deaths occurred mainly as a cumulative result of insufficient financial resources, disorganization and bureaucratic routines. 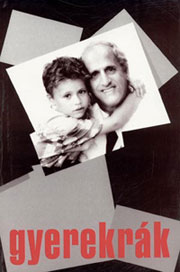 A book that shook public sense

All these experiences encouraged Mr. István Balogh to write a book on his struggle for the life of his beloved son which was not short of conflicts. This is how the book entitled “Child Cancer” came about and was published first in ten thousand copies, then later in another five thousand copies.

The objective of the documentary book faithfully recording the tragedy finally ending with a happy ending of the story of the Balogh family was to demonstrate to patients and to their families that they must not passively observe by accepting the unacceptable illness of those who are close to them, but they can be, and they must be, proactive in order to ensure their final recovery.

Mr. István Balogh may have been the first person in Hungary who dared to confront the medical profession and the medical doctors who treated his son by which he finally managed to contribute to defeating the illness of his son. His book gives the hope to other families with similar tragic problems who have been increasingly asking his help and advice ever since.

There is a lot of complaints about the circumstances in hospitals, the attitude of some representatives of the medical profession, also concerning the magnitude of Latin phrases used that can be hardly understood by layman at all, and often about the mistrust in the treatment suggested by the medical doctors. Much due to the experiences of other parents who turned to him, Roland’s father started to realize that there are grave problems in Hungary concerning the treatment of children with tumor and disorder of the hematopoietic organs. This soon gave him the final push to establish a foundation which is capable to provide help and assistance to children with cancer and to their families. At the end, in 1997, he decided to gave up his original profession and devote his life and career to help those in need. In the same year, the Deed of Foundation of the Children Cancer Foundation was approved and the Foundation has launched its charitable activities.