For the past twenty years, they have been battling to save children suffering from cancer

Many are familiar with the story of the Children Cancer Foundation, but let’s recall how your personal battle against cancer began.

On the 29th April 1996, the doctors diagnosed my son with Non-Hodgkin Lymphoma (NHL) who was three and a half years old at that time. After the biopsy, the treatment of Roland was done at the no 1. Child Clinic’s Department of Haematology. By that time, I had no knowledge about his illness, the cancer itself. But as soon as I entered through the gate of the Department of Oncology, I instantly saw that this was hell on Earth. Bold headed, puffed-up, or emaciated little boys and little girls were walking in the aisle, holding infusion stands in their hands, – from which the chemotherapy poisons were transferred to them through tubes. The tear-worn, dazed parent s were whispering their questions to each other and tried to offer solace to one another. „What is this?” – I asked myself, but I knew that only the doctor had the answer to my question. At the first given chance I asked the therapist of my child about how many percent chance my son had for recovery. „Look – replied the doctor – this is a very serious sickness, one of the most serious types of cancer, therefore your son has 40% chance to recover from it.” My legs started shaking, I was feeling dizzy and had to struggle to be able to stay on my feet. I knew, that was the point when I had to take up the battle against the killer disease, as a person who became a father at an advanced age I could not afford to lose my beloved and admired child! I was doing research in the libraries and through my contacts of friends, to get to know the enemy better. I knew, that in the struggle I mainly needed doctors. I came across an American journal, the New England Journal, in which four professors wrote a study titled The occurrence and treatment of NHL in the USA. From the article, I learned that in the USA, the chances of recovery from this sickens; in this age group among white skinned boys is 98%!!!

Didn’t you approach the Hungarian doctors

Seeing my struggle, I got help for Professor Lajos István; who at that time was the most renown child haematologist in Hungary. Apart from him I contacted American, Austrian and German professors as well, and through their help I more and more felt that there was a chance for recovery. In order to get help for these internationally recognized professionals, I needed all the findings and test results of my son, since I needed to provide them with up-to-date information about the actual condition of Roland.

Such a parental approach was strange to the doctors. They exclaimed against giving me the results, which at the end I managed to get through real battles. I might even say that they took me to be an “enemy” of theirs. The professor of the hospital where my son was treated went as far as telling me on the corridor of the department that with my attitude I am making the job of the doctors more difficult and could even kill my own son by doing so.

What was lacking from the Hungarian health-care system for the successful healing?

During the long hospital treatment, we kept losing the little patients around us. Despite the genuine goodwill in the doctors, there was no money for the necessary medication, there was no proper equipment. All one could feel was that the struggle was being unsuccessful, cancer was the strongest one in almost all cases.

It was heart-breaking to see that the mother of a dying child spends the night in a one and a half meters long children’s bed, just to be able to be beside her child who was struggling for his/her life, and once the mother was so exhausted that she could no longer cope, she set her “bed” in the bathtub of the bathroom. After nine months passed, the results of Roland became better and better. Following the instructions of the Austrian child-haematologist professor; the huge dose of chemotherapy chemicals was reduced, and so the side effects of the treatments also started reducing; in in December 1996, based on the test results, the professor stated about Roland that he had recovered. I knew that this was not the end of our struggle against cancer. The unreasonable child deaths must be stopped, and both the doctors, parents should be given help; that yet, there is hope for defeating the enemy, for defeating cancer.

Your son recovered, but this was not enough for you, you took it upon yourself as a mission for others to recover as well. How did the professionals react to the Foundation?

In 1997 I wrote the documentary novel titled Child cancer, which became a bestseller in Hungary within a very short period of time. I took the task of writing the book upon myself, because I wanted to write the story from my own point of view, which affects so many people. By introducing the book, I intended to contribute to getting to know and understand a deeper and more human side of the patients, doctors and the entire health care system. But this help seemed to be too little, therefore in the same year we established the Children Cancer Foundation, which was the first of its kind in Hungary to be registered as a prominently public benefit organization. The achievement of our unquestionably important objectives was strengthened day-by-day by the support of the premium of the medical profession. We set it as an objective, to build a child-oncological hospital, the cancer patient children could be treated in a centralize way, in one place, just like it is happening in Western-Europe really successfully. Seeing our effective work, almost the whole of Hungary stood by us. Among the noble-minded supporters were pensioners, as well as multinational companies, almost everyone gave their support as one. The law of 1996 made it possible for the working citizens to offer 1% of their personal tax to foundations, associations and churches. A Child Cancer Foundation got far the most of the 1% personal tax offerings, and we put extraordinary efforts into realizing our goals.

Within twenty years how did the foundation help the patients and the healers?

Every ill child who is registered with us receives a regular, monthly support in cash for many years, we also provide the medicines, vitamins not financed by the Hungarian National Health Fund, naturally free of charge. We also fulfil several special requests: the development of sterile rooms for living, obstacle cleaning, payment of delayed utility bills, school starting support, and unfortunately in many cases funeral support. For the hospitals, we buy diagnostics and therapy equipment, which the hospitals cannot finance from their own resources. We signed a cooperation agreement with 56 local governments, with the aim of taking over the task of their social support of families looking after cancer patient children instead of the municipalities of towns, parishes, villages. Seeing the underdevelopment of the healthcare system in the territories with Hungarian minority inhabitants in the neighbouring countries, we set it as a goal for ourselves, to support the cancer patient children in those areas too. At first, I signed an agreement of support with the Romanian Minister for Health for the support of the

In agreement and in line with the aims of the Foundation, the laws on the rights of patients, the law on health care, and the law on personal tax were changed. More and more hospitals turn to the Foundation for help, that we should purchase the medicines the National Health Fund does not support, and also to help in renewing their outdated equipment system.

We have developed the equipment of the onco-haematological departments to the level which is expectable in the 21st century. We have provided help for thousands of families. In our country, we have provided support of an unprecedented magnitude, which means close to 4 billion Hungarian Forints to the patients, hospitals, and offered scholarship to resident doctors who are dedicated to healing cancer.

But the Foundation had to face attack from time to time.

Unfortunately, our success has been accompanied with the factor of GWE (Green with Envy factor), therefore it happened, that organizations were created misusing the name of the Children Cancer Foundation, who – seeing the success of the Foundation - thought that they can also follow our footsteps. Abusing our name, they cheated and tricked people, then grabbing the money they ceased to exist. We sued them and laid claims. The courts ruled in favour of the Children Cancer Foundation in almost all cases and obliged those who violated the good reputation of the Foundation, stated false things about us, or tried to create a false picture about us; to pay millions of Huf of damages and to make corrections. The Children Cancer Foundation – thanks to its supporters -. has helped and is helping up till today in saving thousands of lives of children. Thanks to our activities several hospitals are able to heal with the 21st century technology bought by the Foundation. Unfortunately, the construction of the hospital we visualized at the funding of the foundation cannot be realized, because according to a law of 2013, all CSO-s, including the Children Cancer Foundation had to use and spend all their legally saved money. Therefore, for the time being our own contribution required and mandatory for the EU applications is not available.

We are proud to be the strongest and most genuine CSO in Hungary, and during our operation, we have saved the lives of at least 2.500 children, and helped the families in overcoming their financial difficulties they inevitably have to face related to the illness. 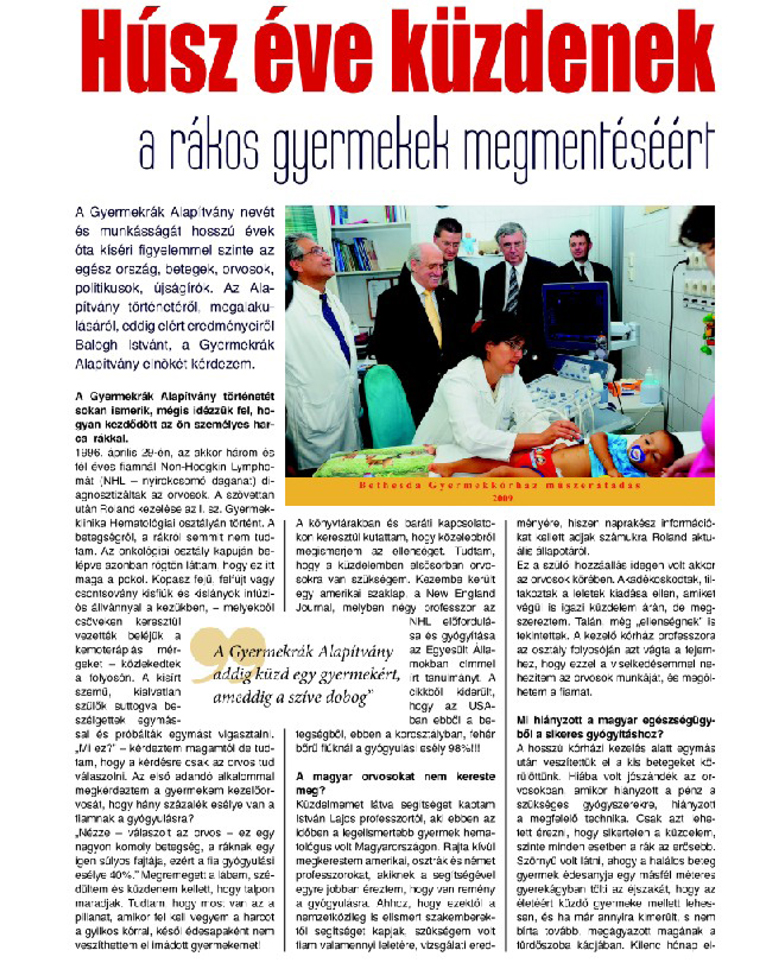 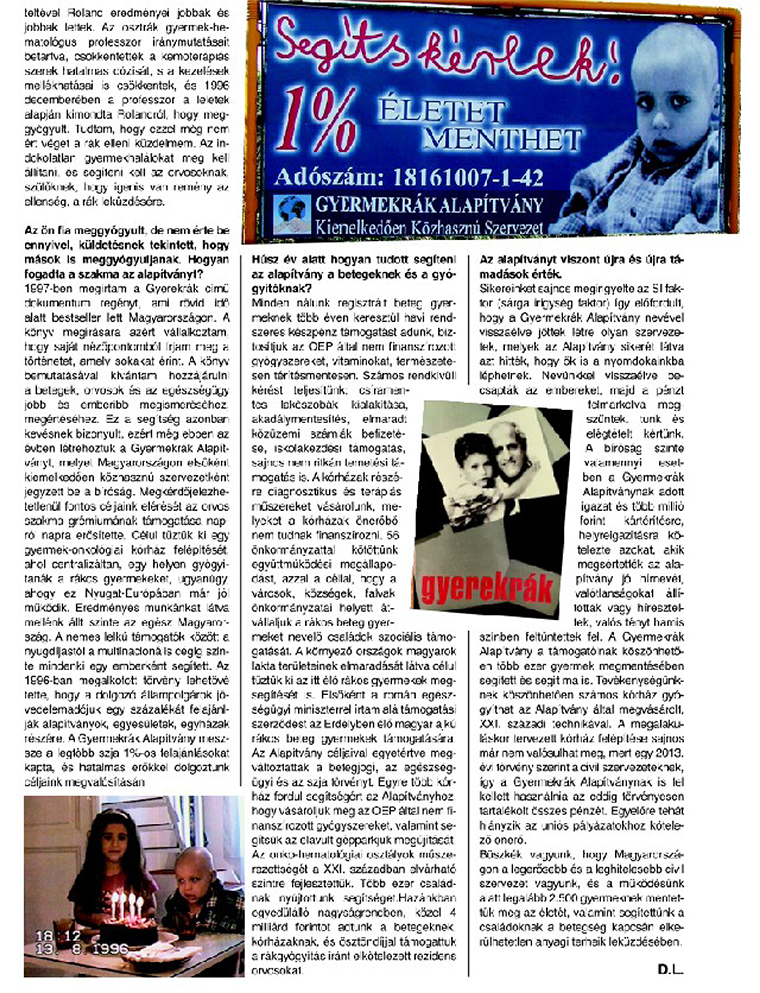