A moving story: András offers his hair to a sick girl - Photo

EGER | There is a young man in Eger, who, due to the wide range of his interests, has appeared in many places in many roles. His unique approach to the world also makes him special among his peers.

András Mikó is not an ordinary young man. Despite his age, he is interested in history, politics, preservation of traditions, sports and acting, but wants to try himself in all walks of life. His specific feature is his hair, which he is going to get rid of in the summer, guided by a noble goal.

There is a young man in Eger, who, due to the wide range of his interests, has appeared in many places in many roles. His unique approach to the world also makes him special among his peers. This time, however, he attracted attention by something else: he wants to get rid of his specific feature, his waist-length, natural brown hair. He sought help on the Internet to make sure his abundance of hair gets to the right place. The change will be conspicuous, that’s for sure!

“It’s not publicity I was seeking; instead, I wanted to help someone in need. When I was approached by the press, I decided to help remind people how many ways there are of doing charity; also, I wanted to show there are more important things in life than looks”, András Mikó, 22, pointed out in the very beginning of our talk.

“There may be many people who are in a similar situation. I’m asking and encouraging them to help, because this is very important. I’ve been growing my hair for 7 years and, to be honest, I wouldn’t want to part with it. Ours has been a good marriage. But I realised that others may be in greater need of it. Life is full of such dilemmas and the question is what decisions we make”, he explained. 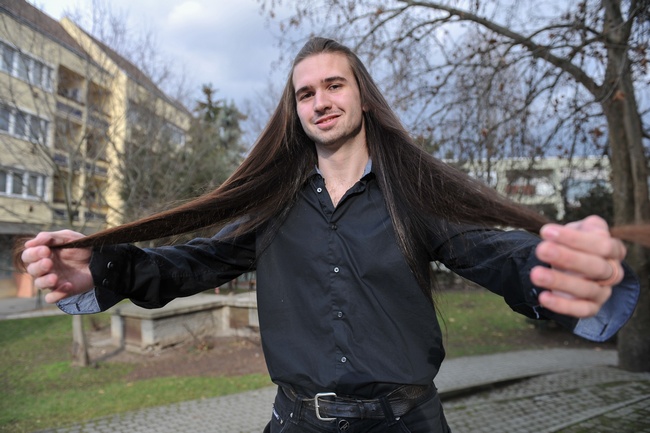 By donating his hair, András Mikó would like to make people realise there are more important things in life than looks. Photo: Viktor Korsós

One and a half weeks ago, András posted a note on the most popular social networking site offering a wig made of his hair to someone in need. He was expecting people who desperately needed such a donation, lacking the financial resources for purchasing a wig. He did not have to wait long. A mother from Eger replied him: her daughter was being treated in Debrecen, had lost her hair, and they did not know if it would grow back. If it turns out in April there is no chance of her hair growing back, she will get András’s hair.

“I had planned it for the summer and decided to post it now because my first attempt was not successful and I wanted to find someone by then. I’m very grateful to the residents of Eger because in a very short time I got plenty of support, advice and help from them. Thanks to them, I soon found the would-be owner. Now we are waiting for the results and I do my best to make use of available time. Still, I hope the little girl’s hair grows back once because having your own hair or wearing a wig are not the same; if it doesn’t, I will be honoured to donate my hair to her”, explained the young man, who himself was born in Eger.

He went to school there and the years he spent at “Dobó István” Grammar School had a formative influence on his personality. It was his teachers and, of course, his parents who set him an example and helped him acquire the knowledge which became the basis of his way of thinking. Now he is studying history and English at “Eszterházy Károly” College, he is in his third year and focuses on his future: he wants to study for an MA while continuing addressing public issues.

A lock from you – a lot for them

Nearly all children undergoing chemotherapy and radiotherapy lose their hair as a consequence of treatment. The campaign “A lock from you – a lot for them” was started by the Children Cancer Foundation and “Tincses Sziget” Children Hairdresser Salon. The goal of the movement is to provide girls with wigs made of real hair until their hair grows back again, as the synthetic wigs reimbursed by the social insurance fund are not very convenient to wear. The pleats collected are used to prepare wigs according to individual needs, saving the young patients from wearing synthetic wigs. All kinds of hair of original colour (undyed), grey, or bleached are suitable for wigs as long as they are at least 20 cm long.