Gréta offered her hair for a girl suffering from cancer

Szeged – You can make a donation even by having your hair cut – since your locks cut can be used by children with cancer. The Children Cancer Foundation launched its campaign to collect human hair three years ago, as a result of which every little patient may get a wig that is made of real hair.

Gréta Nyerges comb her new hair proudly sitting in front of the mirror. The seven-year-old little girl has recently had her waist-long hair cut. It was her decision to do so, and not because she wanted to spend less time drying her hair after swimming.

– It was in the Dr House series where I saw children with cancer, and I really felt sorry for them. I thought how bad they would feel. When my mother was telling me that people are making wigs for them by using others’ hair cut, I immediately told her to send them mine as well.

Two days after their conversation, Gréta went to the hairdresser’s. Her plaits cut were thirty centimetres long. She did not mind it at all, in fact she was happy. When she received a thank you letter by post, she knew it for sure that the hair she had grown for a long time would go to the right place.

In Hungary, some 320 children are diagnosed with cancer every year.  These children lose their hair due to the side-effect of chemotherapy or radiation treatment. The Children Cancer Foundation launched its campaign “A lock is for you, treasure is for them” in 2013, during which human hair is collected to make wigs for ill children free of any charge. 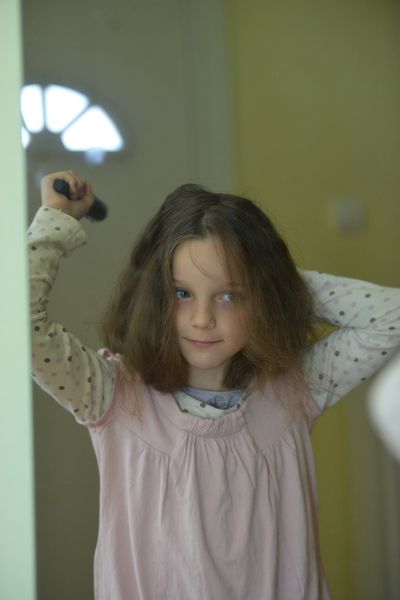 Gréta is growing her again.

– I may help with this one again –

– If you ask a little girl, she says that the real disease is not cancer itself, but that you have to live with no hair on your head. When they get their wig, they become much happier and relieved, said István Balogh, chairman of the Curatorium of the Children Cancer Foundation. He added that the campaign was so popular that they had been able to prepare a wig for every child who requested it so far. And now, the first wig is being made for a boy – before only girls have made such requests.

– It is amazing to see how many people would like to help, and how much they feel other people’s sorrow. In this way, they do lots of good. Wigs that are made of real hair are much easier to wear than those made of polyester, that is why it is so important for us to use real human hair.

There is a salon in Pest where your hair is cut and your new hairstyle is made free of any charge if the locks so cut are offered to the Children Cancer Foundation. Those who do not want to go to the capital city to have their hair cut may also send it to the Foundation by post after having it professionally cut – just like Gréta’s family did.  We do not know who will wear the little girl’s hair from Szeged, partly because a wig is made from more than one people’s hair. Nevertheless, Gréta is growing her again – I may help with this one again – she added.